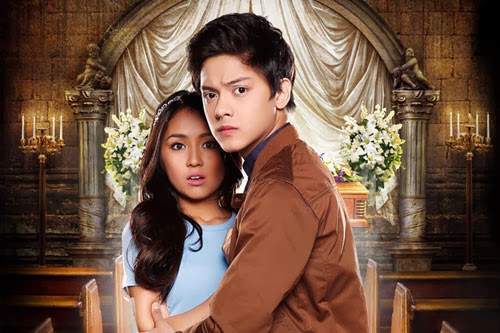 Since it is already our tradition to watch movies every Christmas Day, we bought our tickets in advance for "Pagpag", Siyam na Buhay.  We are huge fans of horror films thus we've chosen to see this movie ahead of the other entries.  Besides my son and daughter thought that it would be best to bring my Mom on a later day to watch Vice Ganda's entry as this is a comedy film and will best suit her.

We have high expectations over "Pagpag" as this movie is well promoted and is having a good casting plus the lead stars Daniel and Kathryn have a huge following.  Overall the movie is good and entertaining, but our expectation was not really met.  In fact, we never got scared at all watching this movie.  There were even scenes where we had a good laugh.  The story has so many flaws and very ordinary.  It seemed to me that this is just a remake of past horror movies with some scenes just modified.  The trailer also didn't turn up to have a direct link to the film as a whole.

I'm not saying that the movie is not really worth our time though, actors and actresses in this film were all good. The only problem was that I was not really satisfied with the story line.  Overall, because of Daniel and Kathryn, watching this movie is just okay for all of us especially for my daughter who is a great fan of Daniel.

Email ThisBlogThis!Share to TwitterShare to FacebookShare to Pinterest
Labels: Movies