It's almost 7 months since the last time I saw Lucio.  Lucio is the shih-tzu pup that I bought for my daughter as a birthday gift last February.  He was just a month old when we bought him from the pet shop.  I was surprised when I saw him again! He's now a full grown shi-tzu.  According to my daughter, they brought him to the pet clinic around 2 weeks before I arrived for grooming since his very thick hair badly needed some trimming.  That's why I was a bit surprised that Lucio looks quite differently as compared to how I saw him from webcam.  But it's okay, now I know that his hair will grow better after being trimmed.

Here he is now wearing my "pasalubong", his Superman t-shirt  (lol). 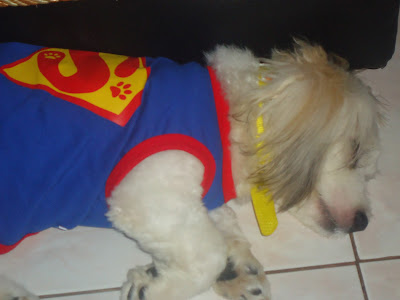 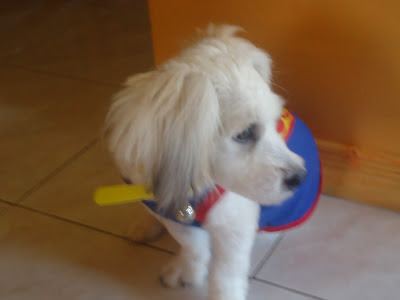 Lucio did not want to go near me during my first day in the house.  He was trying to recognize me.  But that only lasted for a day.  The following day, he was back to normal.  He was already playing with me and even welcome me at the door steps every time I arrived home after attending to some errands outside the house.

Email ThisBlogThis!Share to TwitterShare to FacebookShare to Pinterest
Labels: Lucio