I've been using Moneygram for quite sometime now and I'm fully satisfied with their service.  The first time I work abroad, I was using Western Union for sending money back home to the Philippines but at that time, their transfer charges are a way too high.  Good thing that Moneygram was introduced in Cambodia through Canadia Bank.  Now, money transfers are fast and easy.  Not to mention that Moneygram charged lower compared to Western Union.  Because of that, Western Union was forced to lower their charges as most Filipinos here had switched to Moneygram.  But even Western Union had lower their charges, I still stick to Moneygram as I find it safer, cheaper and faster.  Besides, my salary is directly credited to my account at Canadia Bank every month, so it's more convenient for me, as I just have to go to one place to withdraw and send money to my family.  Moneygram only charges $20 for money transfers until $1,500 and add up on charges for $1,501 and up.  They have a bracket actually so the choice is yours. 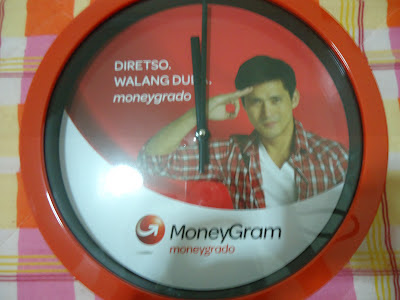 
When I send money last month to my son, I even got a free gift, a wall clock from Moneygram.  I was surprised that after the bank teller handed me my transaction slip, she asked me to sign a paper for a free gift.  She said, if you send $1,000 and above, then you will be entitled for a free gift.  I'm just not sure though if it would be every month (lol).  Maybe it will be for a certain promo period only.

Anyway, sending through Moneygram takes less than 30 mins to process and your family can receive the money you send just after 30 mins from the time that the money was sent. Convenient, right? Another thing that I like about Moneygram is that BDO branches in the Philippines had Moneygram, and since this bank closes at 5:00 PM, it's very safe and convenient for my teen aged son to claim the money.  He just have to show his school ID and the control number which I texted to him and he can deposit it straight away to his own account at BDO.  So easy!

When sending money, all we have to do is just to present our valid passport, fill up a form and pay the corresponding charges and everything will be processed within 30 mins. 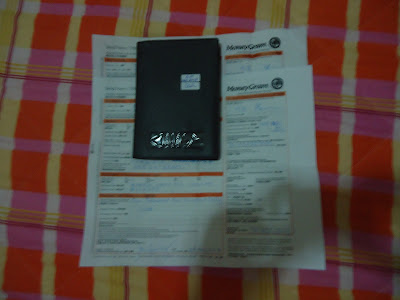 My passport and transaction form
Good thing that there is Moneygram.  Sending money has never been this easy.

Disclaimer  : This is NOT a sponsored post.  Ideas presented here were based from my own experience as a Moneygram user.