If there's one thing and one story that I want to recall and keep in my memory box forever,, that is my son's greatest battle!  Why I called it his greatest battle?  The following story is here to unfold....
I would say that God gifted me with a wonderful son.  He's cute, sweet, loving and responsible (proud momma!).
My son was confined in the hospital when he was 4 years old.  He suffered from acute bronchitis.  Since then, his body become weak and he is so thin.  His body resistance was not that strong.  It's so easy for him then to catch colds and flu.  Realizing it, I consulted our family doctor  as to what vitamins he could take to boost his body resistance and stimulate his mental growth and development. The  doctor prescribed him to take Nutroplex.  And so, as a concerned Mom, I would only want the best for my child.  True enough, my son grew up to be strong, active and intelligent.  When we relocated to our newly constructed house, I was so worry that my son would have the difficulty to travel to and from the school as the new house location is quite far.   But, because my son demanded to stay in his current school, I just gave in.  After all, I wanted him to be happy and enjoy his school life to the fullest.  With God's will, my son was able to surpass all the difficulties of the passing years.  I was staying and working in the Philippines then.  I was closely monitoring his progress in school and continued to inspire and motivate him to excel. With our combined efforts, he was able to rise up from his original ranking of Top 3 to Top 2, which he himself cannot believe.  I used to tell him, "Trust in yourself and recognize your own abilities, and the rest will follow through."  Until the time that I have to move on with my job, as our company in the Philippines closed down it's operations in 2006.  I got the job abroad and my two kids were left behind with just my Mom and a house maid.  But since their foundation was already strong, as they were properly trained up and well guided ever since, there are no problems at all until one time that I was asking each and every person in the house about the result of Edmar's ranking in school as I knew that cards for the first grading were already distributed.  Nobody could give me a straight answer. Until I discovered from Edmar himself that his class standing sank to No. 5.  I felt so upset and restless that time.  There were no days that I did not scold him, ask his whereabouts, go to the extent of asking him to drop all his extra curricular activities in school and even asked him to surrender his cell phone.  He was in a complete "martial law" then...so to speak.

This pains my son so much.  I didn't know that time that he would always cry at night and go to school the following day with swollen eyes.  He was the subject of everybody's attention.  We had a serious talk one day and he compromised with me that should his class standing for the next grading will not improve and go back to it's original place, he would, without further thinking drop all his activities in school, which according to him will give him so much pain.  I compromised with him and accepted his proposal.  I gave him another chance.  His classmates, teachers, adviser and friends are all giving him moral support and encouraged him to be strong and face his life's greatest challenge.  All eyes were glued to him, waiting for the result of his battle.  Days, weeks and months passed.  My son still juggles his time coping up with the so many activities he had in school, focusing on his academics, his responsibility at home and assisting his little sister in her academics, as well..

Until the day comes, his class adviser announced the day for the distribution of cards and the second grading's Top 10.  My son was so stressed out the night before, excited and worry perhaps of what would be the outcome of his greatest battle.

Alas! the day comes.  His class adviser announced the Top 10 and Edmar jumped his way up to his original ranking (Top 2).  Everybody was happy for him. His teachers, friends and classmates congratulated him for a job well done.  Edmar is twice as happy because he won his battle.  I was informed of the result and true to my words, I submit myself to his conditions.

The rest of the year went on smoothly with Edmar enjoying the admiration from his teachers and friends.  He was a school icon and maintained that status until his graduation. 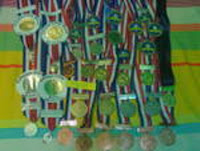 My son graduated Salutatorian with 13 special awards to his credit.  He was awarded with "Academic Excellence for Outstanding Student Leadership" signed by the President then, Gloria Macapagal Arroyo together with few of his classmates who also got similar awards on their own fields of excellence.  I flew back from my place of work to the Philippines and stayed there for only six days just to witness his graduation and her sister, as well, who with God's grace was a Valedictorian.  I cannot forget that day of my son's graduation.  No amount of words can describe the feeling of happiness, excitement and pride that engulfs my being.  The privilege, the honor and the thrill of walking down the aisle with cheers and applause from the crowd who witnessed that momentous event made my day truly happy.

Looking back, I ask myself, "What is the price of being a Mom?"  It's the feeling of having a child who has grown up to be the best of what he can be, amidst the trials, sorrows and difficulties.
" A Fighter Not a Quitter!"
Someone who would do his best to make his parents  truly happy and mighty proud of him.
I'm happy that Nutroplex has been my long years partner in providing my two kids with the nutrients needed to keep them healthy, strong and intelligent.
My kids, more than anything else, are my life's greatest treasures and I thank GOD for them !
at December 16, 2010