It's been a week since I was back here in Cambodia.  It's been a busy week for me... rearranging my things back to their proper places, unpacking my luggage, changing the bed sheet, comforter and towel and fixing my cabinet....All those stuff kept me occupied for quite sometime.  After a long vacation in the Philippines, I can still feel the "hang over".  I missed the Filipino foods, the Filipino TV series that I used to watch every night, the relaxing atmosphere of my home and yes... the green sight of my home garden.  I guess this is the down side of any person who just came back from her own country.  But staying in Cambodia led me to so many discoveries and many new things.  Cambodia has a culture which is uniquely it's own.  I would admit that it was a struggle for me at first to get used to the local foods they served here but as I stay here longer, I have learned to adapt and even appreciate some of their local foods.  One thing that strikes me is their great love for vegetables and herbs.  It's very seldom you could find a Filipino who would eat raw vegetables and herbs except from some "green salads" which consist mainly of lettuce, tomatoes, white onions, cucumber and celery.  But in Cambodia, you will see that raw vegetables and herbs are always part of their meals.  This is where I discovered their unique way of eating "balot".  In Khmer, they call it "pong tir kon".  It is actually a duck egg with a little chick inside which most other Asian people won't dare to eat.  But in Cambodia, this is well loved by the locals.  They used to serve it with handful of peppermint and comes with black pepper with lemon and some fresh garlic with chili.  At first, I don't get the idea of why is there a need to eat it with herb but as my local friend and colleague explained to me...the pepper mint is actually to contradict the "foul smell" of the "balot" which I think is logical.  Now, I cannot imagine eating it without the pepper mint.

Not only that, even their noodle soup also comes with a plate of raw vegetables and herbs, too.


This picture was taken from Vietstuff Blog page
, 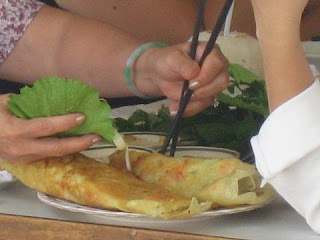 This is the "Ban Xeo" 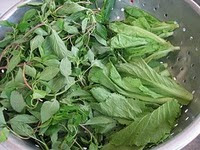 I also developed a liking to "Ban Xeo".  It is actually a prawn and pork filled crispy pan cake served with a lots of green.  Probably, this is a Vietnam influence to Cambodia as I consider this as an original Vietnamese food, however it is widely served as well in Cambodia.  This usually comes with a sauce consisting of water, vinegar, fish sauce, pounded peanuts, chili, garlic and some shredded carrots.  It was an advantage for me that I learned to like and love these foods.  Not only they are cheap but also nutritious.
In Philippines, herbs are also being used in some food preparations but maybe only by Chefs from "high end" restaurants.  Herbs are not  a common sight especially on street foods.  I never really had a wide knowledge when it comes to herbs but I only knew the popular ones.   Because of this, I took time to search for their description on the internet, as follows:

Basil is a culinary herb prominently featured     on
Italian cuisine.

Oregano scientifically named "origanum vulgare" by Carolus Linnaeus is a common species of oreganum of the mint family.

Parsley is the worlds most popular named from the Greek word, meaning "rock celery".  It is a bright biennial herb and is usually used as a table garnish.

Peppermint is a hybrid mint between the water mint and spear mint.  It is popular flavoring for gum, tooth paste and tea and is also used to soothe the upset stomach or to aid in digestion.

Garlic is a popular one and has a very distinct flavor and used to enhance meat, vegetables and salad dressings.

Aside from the shape of their leaves, you can distinguish herbs by their aroma.  but don't just stick the leaves under your nose.  To get a better sense of their smell. rub the leaves between your fingers.  The warmth of your fingers will release their flavor oils.

Herbs wilt quite easily so don't buy in bulk unless you need them.  What to do with the excess? Place them on tray and air dry for a day or so.  When dry, store in covered containers.

To keep herbs longer, wrap them in paper towels before putting them in re-sealable plastic bags.  Paper helps retain moisture.

Herbs make great garnishes for foods, particualrly mint and parsley.  But people always ask, "should I eat them?"  Yes, you can eat them.  These two herbs actually help freshen your breath after a meal.

How to substitute fresh with dried herbs?  For every tablespoon of chopped herbs, try to just use a teaspoon of dried herbs.  Dried ones have more concentrated flavor so you can use less.

Herbs are specifically good especially when we get ourselves acquainted with them and their uses.  This is one thing I love about this country, I was able to familiarize myself with herbs which I guess is not really too late......